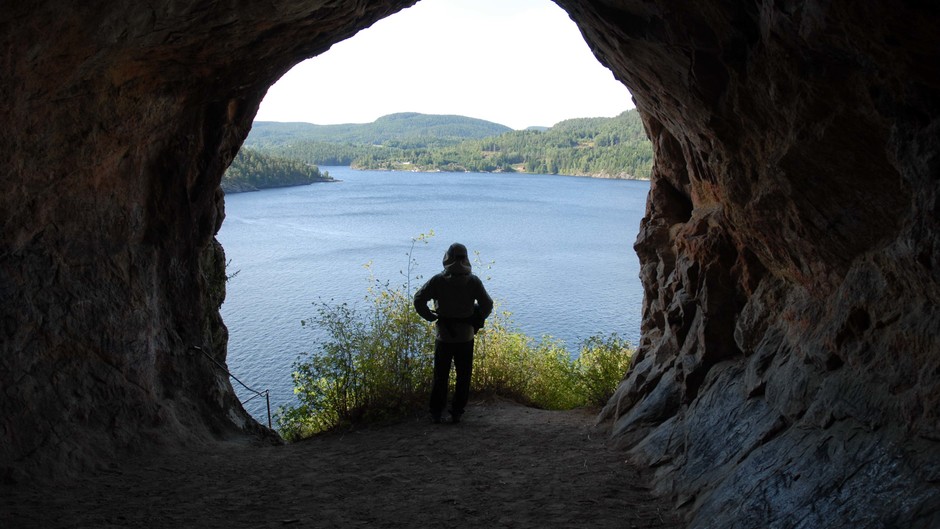 North of Løveidkanalen along the Telemark canal lies Mikaelshula. It is a cave in the mountainside, about 30 metres up in the bedrock.

At the entrance the opening is 5-6 meters high and it gets bigger as one goes inside. The cave extends about 16 metres into the mountain.

Mikaelhula is the result of deep erosion of granitic gneisses and it has been carved out more later on by people.

The cave was used as a church in the Middle Ages. Mikaelshula is named after the Archangel Michael, who, in Revelations, fought together with his angels against the big dragon “Iler ormen”, which was thrown down from heaven to Earth, where it particularly frequents caves in high places. In the Christian Church, special churches were erected on mountains or in caves named after Archangel Michael. (Source: Lokalhistorisk reisen på Telemarkskanalen).

To reach Mikaelshula you must either come by boat or follow the trail up from a small dock in Norsjø. The trail is steep, and the uppermost part can be slippery in wet weather. You can also reach Mikaelshula from the other side, via a tractor road and trail from Øvre Gisholt farm. Be careful when you descend to the cave!